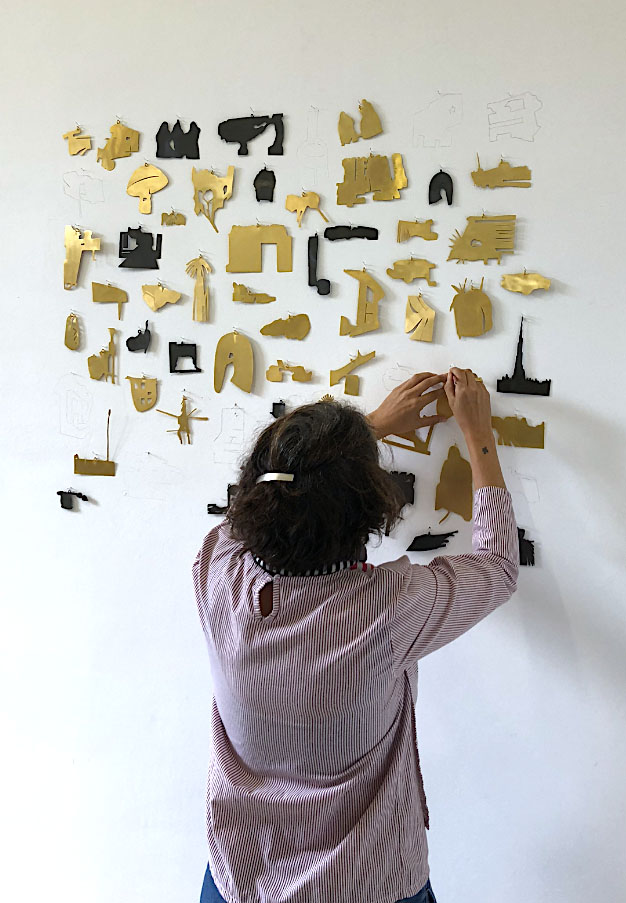 Lives in Girona and works internationally.

A Catalan maker and educator. Saez’s oeuvre spans the last twenty years. Her works include colourful fabric bladders, suspended below or above black metal containers, or fragile prosthetic scaffolds made of cardboard, and although occasionally wearable, her creations pay scant notice to the body: they derive their evocative power from their distance to the ground, not the skin. Yet, while sculptural, her repertoire of shapes continues to be homebound and proportionate to the hand: Saez belongs to a relatively small group of makers whose practice is guided by the dual nature of contemporary jewelry, at once sculptural and wearable. Educated at Massana School in Barcelona, she received the Massana Award in 2001. Later, she became the studio assistant of Professor Ruudt Peters in Amsterdam [2005-2007] and she still collaborates with the artist up until today. Her works have been exhibited since 1996 in galleries and museums around the world and she received various incentive grants to promote her personal work. In 2006, Saez won the Talente Prize Munich. Her pieces are published in different magazines, catalogues and specialised books of jewelry as well as other disciplines. She completed her Master of Arts at The University of Trier, Idar Oberstein, Germany in 2010 and continued to be based in The Netherlands until 2012, developing her own art-projects.

For the past fifteen years, Estela Saez has been invited as a guest teacher and lecturer worldwide. She participates and organises  jewelry-related events, seminars and cross-disciplinary projects to promote critical thinking in the field. Her Master Thesis “The Core & The Shell” [2010] is partially based upon the question of how to connect the insider-jewelry-circles with the outside and the society at large. Saez most recent project took place in post-revolutionary Cairo, Egypt as a director of “The DSAF”, The Design Studio by Azza Fahmy, from 2013 to 2016. Based as jewelry Creative Director in the Middle East, consulting and enhancing jewelry design and its educational system in the region. The project during Estela’s management was appointed for the UN-Women as an example of how jewelry & design enables self-sufficiency, and how can play an essential role in changing people’s life perspective.